However, the amount of samples taken drastically drops when I try to take measurements using the Kickstart 2 software. Keeping the NPLC level at 0.1 (Fast), with a fixed Range, NO Filters, Auto-zeroing or Triggers/Measurement Delays, I get, at maximum, 9/s. What's stranger, if I drop the NPLC levels lower that 0.1 (even to 0.099), the amount of measurements drops even lower, to ~1/s.

Is there a setting or preset I'm missing? Any advice would be absolutely amazing. 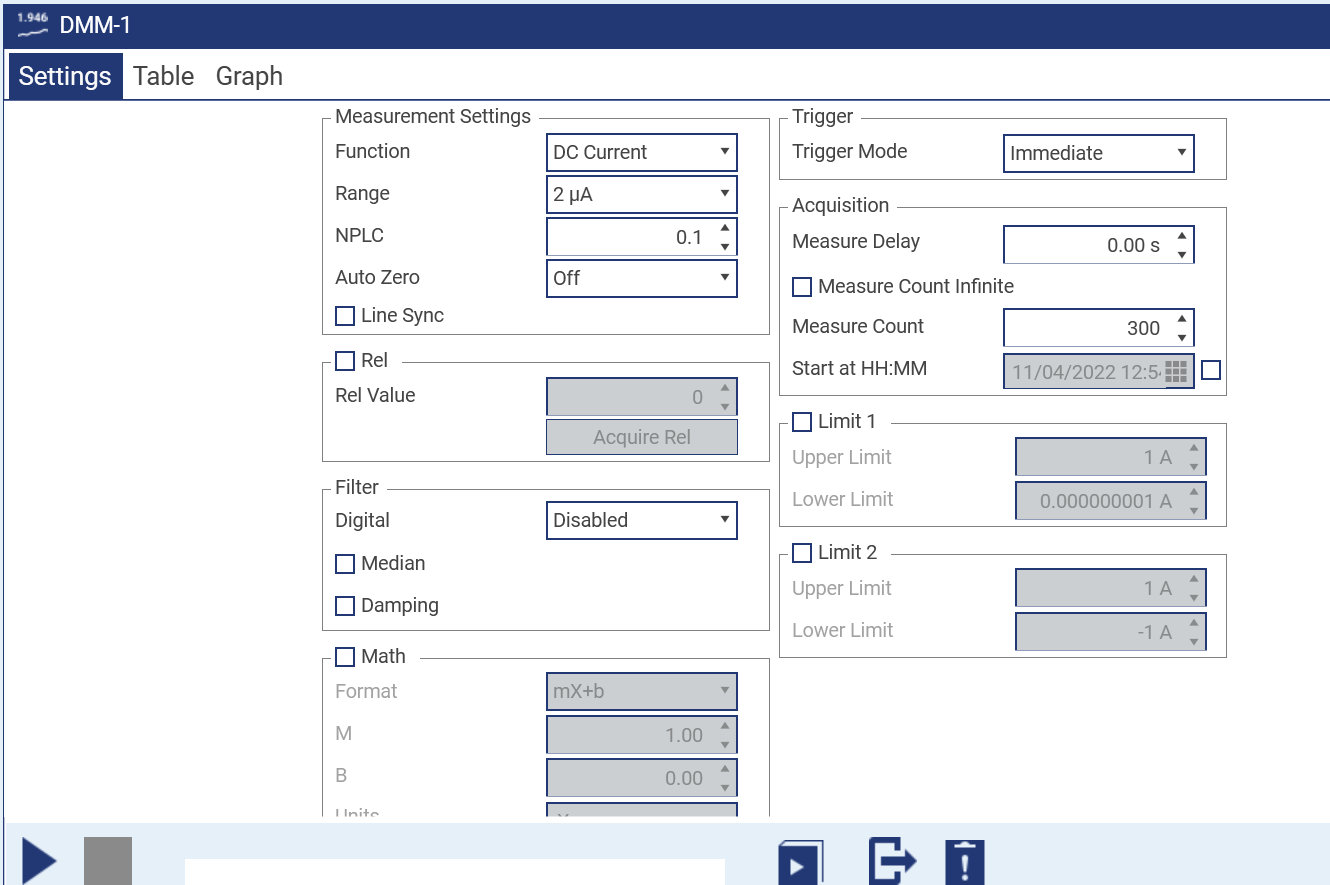 Can you give us the exact version of KickStart?
BTW, we are at 2.8.0 right now.

You mention NI MAX. Check if the NI IOTrace tool is there and launch it if yes.

Then when using KickStart, the trace tool can capture the commands.

Odd how your observed reading rate slows at smaller NPLC, when we expect the opposite. What if you ask for 2 or 5; does it get faster?
But the trace tool will let us see what is being sent to the instrument for various values in the KickStart GUI.

But please verify for us that you’re at a recent release level and we will log a bug if needed.

Hello Andrea, thanks for your reply!

I originally had this issue in the 2.5.0 update, however after updating to 2.8.0 the issue persists and is identical- without any change to the drop in sample rate or the strange effects when I lower the NLPC.

NI IO Trace is a fantastic tool, thank you for recommending it! I've done some investigation into the commands being sent between my device (Laptop) and the 6514 Electrometer itself and identified a few points of lag! I'll go through them a little bit below.

Unfortunately the drop in sample rate still carries across when raising the NLPC above 0.1. At an NLPC of 1, for example, I appear to be getting a data point every 0.27 seconds, or at a frequency of 3.7 Hz, which is about twice as slow as measurements done at 0.1 NLPC.

As for the results gained from NI I/O Trace, the source of lag seems to be a little different for NLPC 0.1 and NLPC 0.099. I'll attach the raw data (.trace files) as well as some excel sheets I made to make the data usable. Let me know what else I can send that would help! 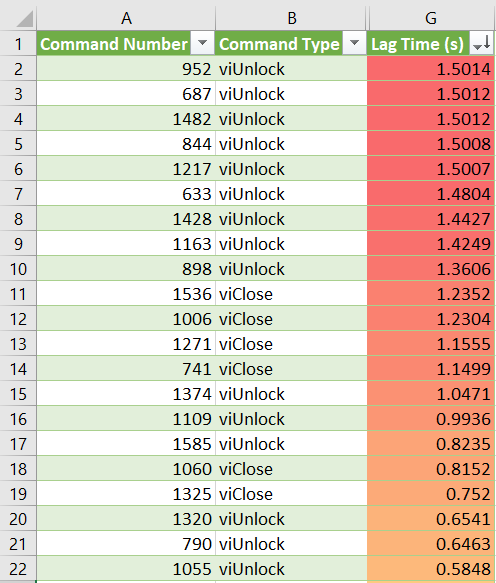 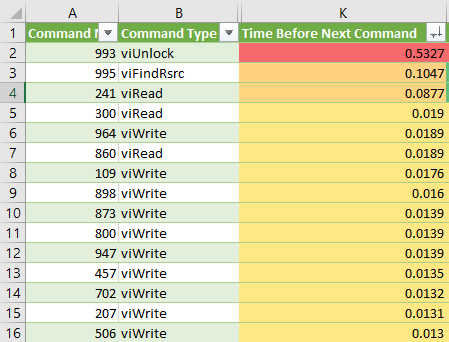 The sudden drop in sample rate when lowering the NLPC to 0.099 seems to be coming after two commands: viUnlock and viClose. These have lags of ~1.4 seconds.
Weridly, however, the lag doesn't come from the 'Call Duration' (How long the computer and device are talking to each other for), but instead Kickstart just doesn't send another command for those 1.4s after the call is completed. To me, it looks like the software itself is putting its next measurement 'cycle' on hold to process what its just received. Maybe this is tied to the auto-plotting function?

For 0.1, the command which takes the longest appears to be a viWrite "*cls", though the computer only waits between 0.01 and 0.017s, which doesn't seem significant on its own. Instead the lag between commands for 0.1 just seems to be a buildup of each individual step in the 'measurement cycle' (There's probably a proper word for it) taking longer than should.

I'm still not really sure what to make of this, or how I could go about fixing it. If I can supply any more information, please let me know! I'll do my best to include anything that might help solve the issue.

Thank you again for you help!

PS: A few notes on the included Excel files
You might have to unhide a few columns to get the full data. 'Lag time' is simply the time between the commands minus the 'Call Duration', but it doesn't really change much when compared with Time Between Commands. If you want sort the data chronologically, just go to 'Total Time', and sort smallest to largest. The second sheet (Time between Data's) shows how long it is between actual measurements via the command viWrite "data?". Also, out of curiosity I re-plotted the data in the third sheet, 'Actual Data', and it corresponds to the data plotted by Kickstart during these tests.

Can you confirm the firmware version on your 6514?

Thank you for posting the trace, but looks like it was from later in the process and does not contain the actual setup commands sent to the electrometer. A trace during that time might show that the NPLC field in the GUI is not being properly communicated, etc.

But we can investigate and determine root cause on our end. I have opened a formal bug on this.
Top

Hello again Andrea! Awesome to hear you're opening up a report- I'd love to know what comes of it down the line.
The Firmware Version reads as 6514 REV:A13, if that helps!

I've attached a full run of Trace data, starting from device boot up and including connection and operation by Kickstart.

The settings for Kickstart's measurements were:

Connection with Kickstart happens at ~ Command # 110, and operation begins at ~600/700.
It looks as if several errors did pop up during operation. These appear to be mostly timeout errors, but perhaps you'll find out more on your end.
As always, let me know what more I can do to help.

Users browsing this forum: No registered users and 1 guest