Questions in this forum area are community supported. Tektronix does not regularly monitor posts in this area.
Post Reply
1 post • Page 1 of 1

We're rocking an old CSA8200, but it still works pretty well, I think!

I am playing around with a set of frequency multipliers from Mini-Circuits. These are unpowered devices that take an input signal, f, and output a signal with twice the frequency. Of course you lose a lot of power in the process, and the output waveform looks ugly as heck, but the 2f components are there: 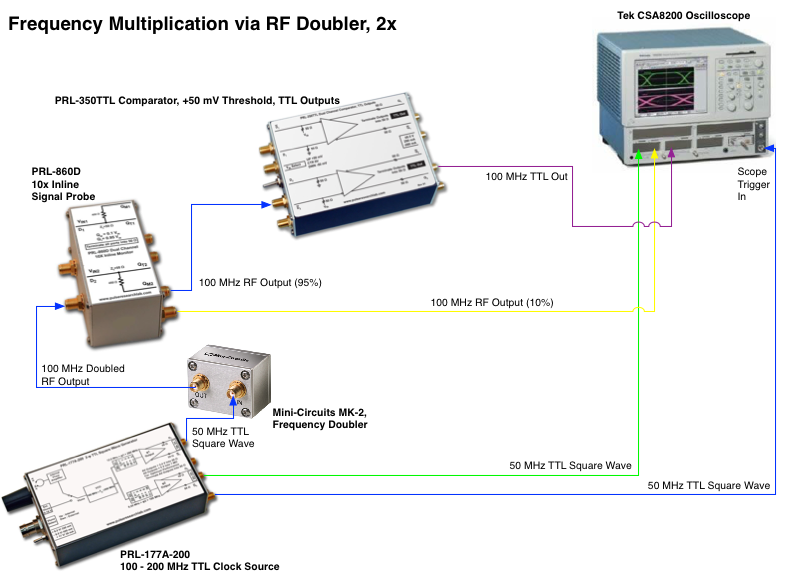 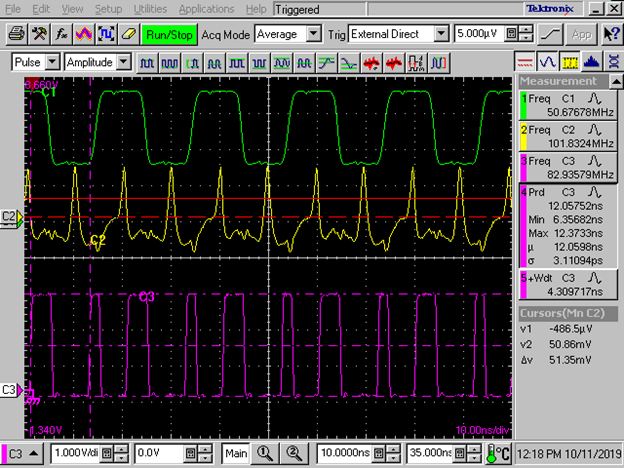 So I'm starting with a 50 MHz TTL signal (0 - 2.2 V into 50 Ohms) that has reasonably good symmetry (Ch. 1, green trace). An identical copy of this TTL signal goes into the Mini-Circuits MK-2 multiplier. I'm inline-probing a bit of the MK-2 output and feeding it into Ch. 2, yellow trace, with the probe attenuation correctly set in the scope.

The rest of the MK-2 output is going into a comparator module with TTL outputs, and a settable input threshold of 0 V or +50 mV. The TTL output of that comparator is on Ch. 3, purple trace. Scope trigger is from another copy of the original 50 MHz source.

If I set the comparator input for 0-crossing, the output waveform alternates between fat pulses and skinny pulses, which is exactly what I'd expect, because 0 V is shown on the scope as the dashed horizontal cursor, and the yellow trace crosses that threshold narrowly for half the pulses (I'll call those the "even" pulses) and widely for the "odd" pulses.

Which means I probably have the measurement set up incorrectly. It looks like it's only measuring the "even" period.

If I trigger instead on a copy of the 100 MHz signal, the Prd measurement now sees the variability of the periods, but it's not stable enough to take a measurement: 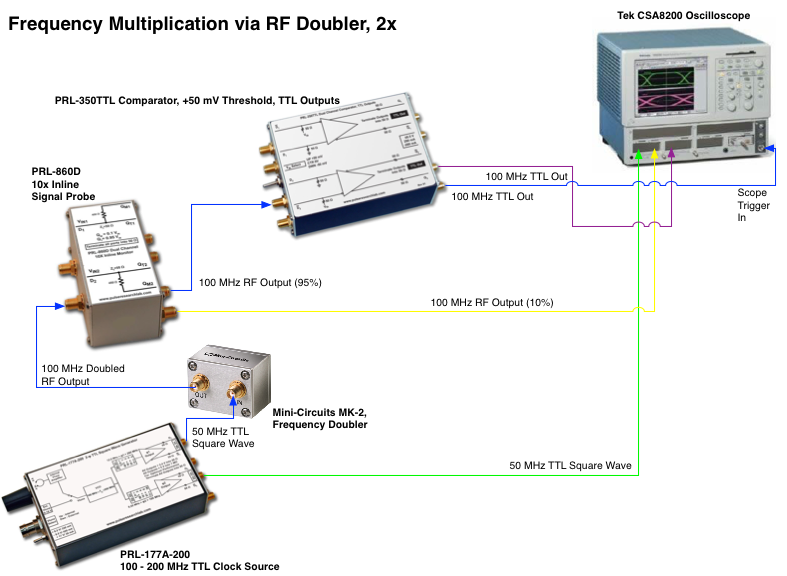 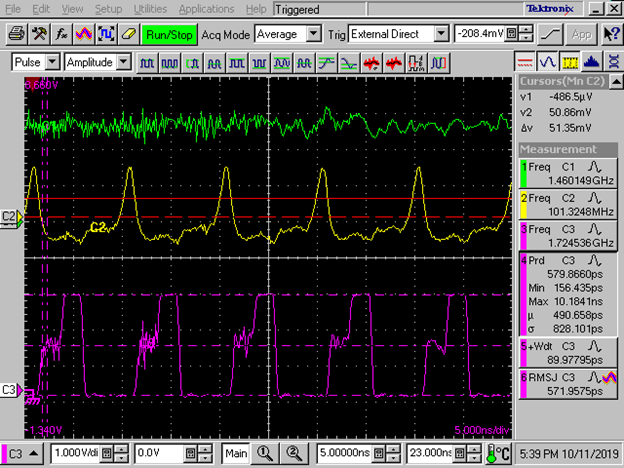 Furthermore, I can no longer see the true waveforms for Chs. 1 and 2, because they're being averaged.

Is there a way to set up the scope to trigger at 50 MHz, but take the Period measurement across two periods (including the variability thereof)?

p.s. in terms of the actual application, I would set up the comparator trigger point at +50 mV (the solid red horizontal cursor), and then the even/odd pulses are much closer in width, but I want to test out the measurement setup when they're visibly different, so I know that I'm taking the correct measurement. When I see visibly different widths/periods, but the scope is measuring σ = 3 ps, then I know I'm doing it wrong! Once I get the measurement set up correctly, then I'll tweak the comparator threshold to get the performance as good as possible.
Top
Post Reply
1 post • Page 1 of 1

Return to “Other or Discontinued Oscilloscopes”